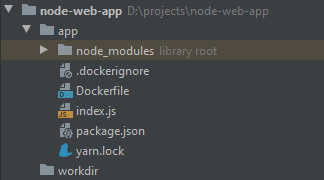 this is my Dockerfile

when I build the image from that Dockerfile the build done successfully, after that I checked the specified working directory (/d/project/node-web-app/workdir). the problem is it doesn’t have app files which should be copied using COPY command.

my question is this problem: bug in docker or my understanding of WORKDIR command is wrong?